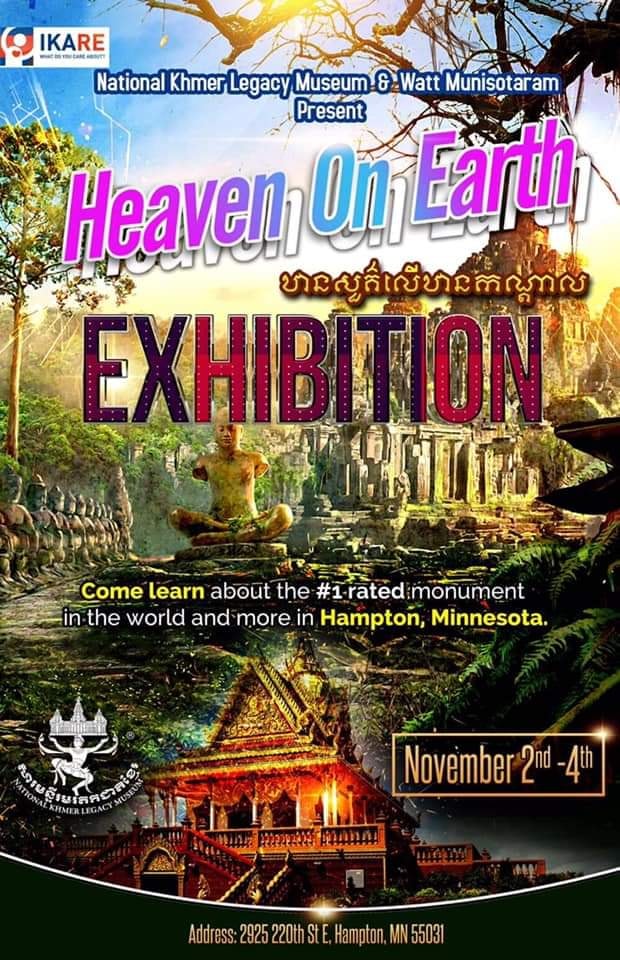 EXPERIENCE HEAVEN IN HAMPTON, MINNESOTA THOUGH THE EYES OF CAMBODIAN AMERICANS
AN EXHIBIT OPEN TO THE PUBLIC ABOUT THE MUSIC, CULTURE, PEOPLE, AND KHMER RELIGION.

The National Khmer Legacy Museum, in collaboration with Wat Munisotaram, is pleased to present Heaven On Earth- An educational exhibit about Peace and Unity.  The exhibit, which is also a project of the National Khmer Legacy Museum, is an extension of a collaboration between Cambodian Buddhist temple ( Wat Munisotaram ) with the “first and only” Cambodian legacy museum outside of Cambodia to provide an opportunity for audience of all ages to become entertained while gaining awareness of the root of the Cambodian culture, religion, history, and contribution in world and American history.

Present at the exhibit will include four Master Artists from Cambodia Ten Pat, Sie Song, Bunthoeurn Dim, Soun Thun who will tour visitors on the process and mechanics of sculpting, designing, and placement of artwork and architect on the 42 acre land, home to the largest Cambodian Buddhist temple in the United States.

“There was a time when the world was full of magic and mysticism, and everything on Earth lived in harmony with Heaven..This weekend, Nov. 2-4, let’s travel back in time and discover how Heaven is expressed in the Khmer music, culture, People, and religion,” said Kosol Sek, Managing Director of the International Khmer Assembly which operates the National Khmer Legacy Museum.

“The exhibit is a fine example how religious and non-religious organizations can work together in commonality to advance the community,” said Wat Munisotaram Abbot, Moeung Sang.

A live performance of Mohori, Pinpeat, and other Celestial music will be played on Saturday between 12-2PM by the Khmer group Kingdom of the Lotus.

Kathina is a Buddhist festival which comes at the end of Vassa, the three-month rainy season retreat for Theravada Buddhists. The season during which a monastery may hold Kathina is one month long, beginning after the full moon of the eleventh month in the Lunar calendar ( usually in October ).

The Heaven On Earth Exhibit was scheduled to coincide with the Kathina festival to appeal to a wide audience.

To request images and other documents, request interview or appearance, or for more information, please email: info@ikare.info.

Wat Munisotaram is located in Hampton, Minnesota and is the largest Cambodian Buddhist Temple in the United States.

The National Khmer Legacy Museum is the first and only legacy museum of the Cambodian people outside Cambodia.

The National Khmer Legacy Museum and Wat Munisotaram is working in collaboration to educate the general public about the culture, history, arts, and religion of the Cambodian American community. Future collaboration will include the construction of a fixed Angkor Wat and/or Mobile Angkor Wat. 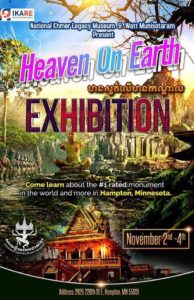